Ampicillin and Dicloxacillin were retained with minimal amounts of buffer concentration and with good run-to-run precision in this HPLC method that can be readily transferred to LCMS. The combination of both drugs presents a mixture of polar and non-polar antibiotics that may incur difficulties to retain on conventional HPLC columns in Reversed Phase. This drug mixture typically requires the addition of buffers as well as ion pair reagents to aid in retention on regular columns.

We demonstrate how the use of the Cogent Diamond Hydride™ Column used in Aqueous Normal Phase can retain both Ampicillin and Dicloxacillin with minimal amounts of buffer concentration. These compounds are easily retained, with good run-to-run precision, and possess symmetrical peak shape without ion pairing reagents. (%RSD = 0.333, SD below 0.001.) 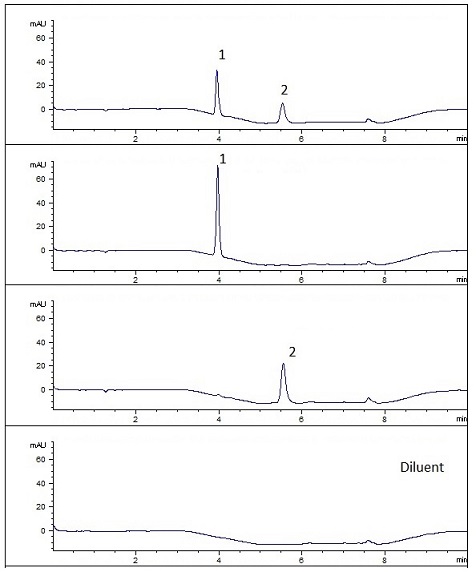 Note: Ampicillin and Dicloxacillin are members of the beta-lactam penicillin antibiotics. Ampicillin has the capability to penetrate Gram-positive and some Gram-negative bacteria. It differs from penicillin G, or benzylpenicillin, only by the presence of an amino group. This amino group is key in helping these antibiotics pass through the pores of the outer membrane of Gram-negative bacteria, such as E. coli. Ampicillin acts as an irreversible inhibitor of the enzyme transpeptidase, which is required by bacteria to produce the cell wall. It inhibits the third and final stage of bacterial cell wall synthesis in binary fission, which ultimately leads to cell lysis. Dicloxacillin inhibits cross-linkage between the linear peptidoglycan polymer chains that make up a major component of the cell wall of Gram-positive bacteria.