The mechanism of aqueous normal phase (ANP) retention is an active area of investigation but the consensus is agreed upon. Much progress has been made in recent years at elucidating how polar compounds are retained by this mechanism and how it differs from the other techniques used for the analysis of hydrophilic or polar molecules.

A peer reviewed study has demonstrated that the water layer on a silica hydride surface is on average only 0.5 of a monolayer [1].  This relatively low amount of water on the surface precludes the partitioning mechanism that appears to control solute retention for the popular HPLC mode named Hydrophilic Interaction Liquid Chromatography (HILIC) as well as for Reversed Phase (RP).  Therefore, a variety of experiments have focused on understanding the surface of silica hydride in the presence of typical mobile phase solvents and additives.

These studies have revealed some unique properties of the silica hydride stationary phases [2,3]. In addition to confirming the relatively thin water layer, they have shown that the surface possesses a very high negative charge. However instead of this charge being the result of silanols as is the case for bare silica which is often used for HILIC methods, the charge has been ascribed to the presence of excess hydroxide ions on the surface from the aqueous component of the mobile phase as shown in Figure 1.  A similar phenomenon has been observed for oil droplets in contact with aqueous organic liquids.  In this case the silica hydride surface which is mildly hydrophobic behaves like an oil droplet and hydroxide ions from the surrounding liquid accumulate on the surface. Therefore the mechanism of ANP retention is most likely a combination of ion attraction for positively charged species or ion displacement for negatively charged compounds.  This may be similar to the “ion interaction” mechanism. For polar neutral compounds, the most likely scenario is a displacement/adsorption effect for retention.

Before the actual thickness of the water layer was measured, the fact that silica hydride materials equilibrated faster that typical HILIC phases indicates that it takes longer to re-establish the water layer on the ordinary silica materials due to thicker aqueous layer on the surface.  The establishment of hydroxide as the source of negative charge is also significant.  Previously other investigators ascribed this high negative charge to silanols which did not seem reasonable since the surface has been shown to be predominantly (~95%) SiH groups.  Without considering the fundamental differences between silica and silica hydride and relying on what is known about silica led to this erroneous conclusion.  More investigations are currently underway to confirm or embellish these latest findings about silica hydride stationary phases. 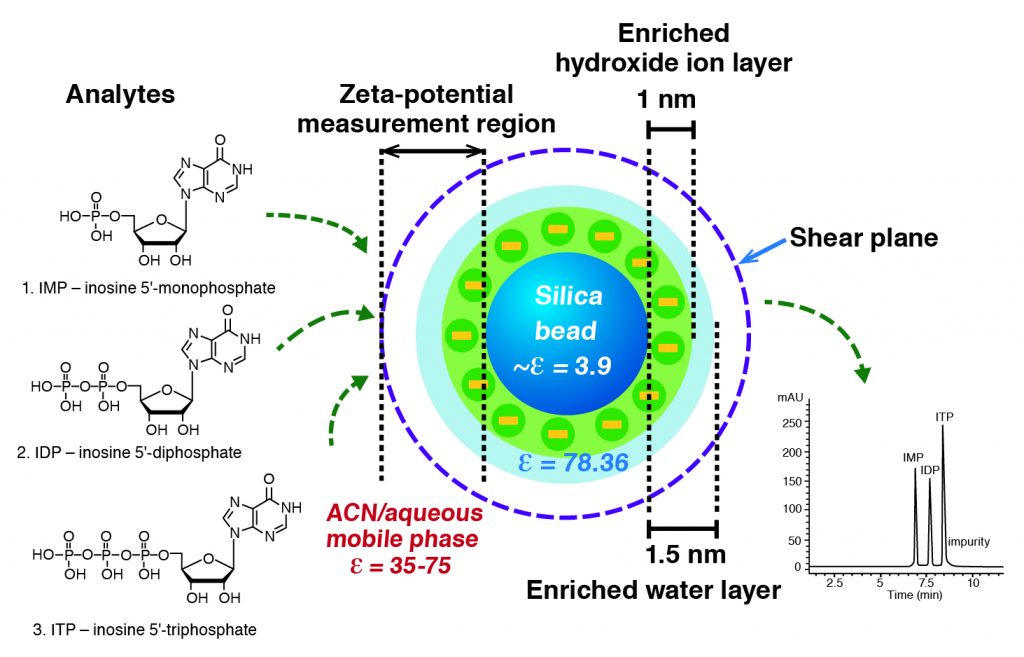 Figure 1.  Composition of environment near the surface of a particle with a silica hydride surface.  The ε value is the zeta potential indicating high negative charge near the surface.
Adapted from Ref. 3

1)       Understanding some of the differences between HILIC columns and TYPE-C columns. – Tips