One of the most important applications of LC-MS today is the quantitative analysis of Plasma Samples. Pharmaceuticals and their metabolites may need to be monitored in Plasma in fields such as clinical testing, Forensics, and Toxicology studies. Advancements in LC-MS capabilities have enabled new possibilities for these types of analyses, with lower levels of detection and enhanced MS specificity now achievable.

Despite these advancements, the analysis of blood samples is still associated with a number of obstacles. Many of the polar compounds found in these types of samples have been difficult to retain using conventional HPLC Columns. Ion Pair Agents used to increase retention in Reversed Phase are unsuitable for LCMS, and HILIC methods tend to suffer from a lack of robustness. Furthermore, the complex Plasma matrix can lead to build-up of contaminants on the analytical Column, which may result in increased background noise, ghost peaks, and other undesirable Chromatographic phenomena.

Using Cogent TYPE-C Silica™ based Columns, Plasma samples can be readily analyzed either by Reversed Phase or Aqueous Normal Phase (ANP). Problems associated with lack of specificity can be overcome by the Columns’ ability to retain either polar or nonpolar compounds as well as by the detector properties themselves. Robustness issues due to build-up of Plasma matrix components on the Column are less of a concern with Cogent™ TYPE-C phases due to the low amount of surface silanols. If any such issues occur, convenient washing protocols can be used, either by incorporating them into the method itself or in separate washing steps.

Click on pdf Below for the Full Study including Method Conditions. 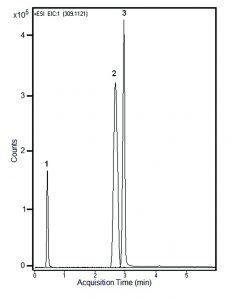 No 332 Pharmaceuticals in Plasma with LCMS pdf   0.9 Mb   Download File