A Simple and Reproducible LCMS Method

This Method demonstrates the ability to separate a wide variety of polar metabolites using Mass Spectrometry for detection. When monitoring the EIC at 133 m/z, seven Peaks were positively detected in a Urine sample by comparison with standards or by using accurate mass.

Although primarily focused on the analysis of metabolites in Urine, the Method could also be applied to the determination of these compounds in other physiological or biological fluids. 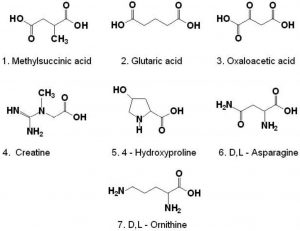 Notes: The determination of metabolites and amino acids in biological fluids is an important problem in clinical biochemistry and analytical chemistry. Changes in the concentrations of these compounds in Urine, serum and other physiological fluids has proved to be correlated with several neurological disorders such as Alzheimer’s disease, ischemic stroke as well as with a number of metabolic disorders such as phenylketonuria, argininemia, maple syrup Urine disease and others.