Method development for Isotretinoin was first performed with a Reference Standard, on an HPLC with a Diode Array, UV Detector. The final, Method (Isocratic) was then transferred to an LCMS for analysis of the active ingredient in Human Plasma. The potential matrix effect on the ionization of Isotretinoin was evaluated by comparing the Peak Area of the Analyte dissolved in the supernatant of the processed blank Plasma to that of Standard Solutions at the same concentration.

Three different concentration levels of Isotretinoin (20, 500 and 1200ng / mL) were evaluated by analyzing three samples at each concentration level. A matrix effect was observed, leading to an 18–25% reduction of the peak area in Plasma compared to the standard solution. The ion suppression effect was relatively high but reproducible. 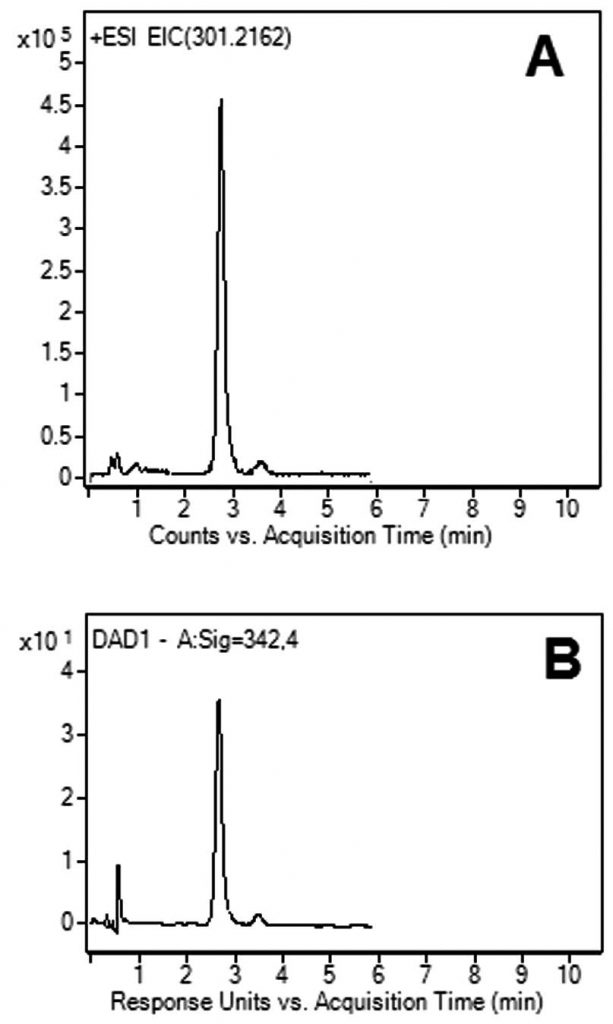 Method Conditions
Column: Cogent Bidentate C18™, 4μm, 100Å
Catalog No.: 40018-05P-2
Dimensions: 2.1 x 50mm
Mobile Phase:  70:30 Solvent A: DI Water with 0.1% Formic Acid (v/v) and Solvent B: Acetonitrile with 0.1% Formic Acid (v/v)
Injection vol.: 1μL
Flow rate: 0.4mL / minute
Detection:
—Figure A: ESI – POS – Agilent 6210 MSD TOF Mass Spectrometer
—Figure B: Agilent DAD, UV Detector
Sample Preparation:
—Figure A: A 0.5mL aliquot of the collected Plasma sample was pipetted into a 10mL glass centrifuge tube. 4.0mL of Acetonitrile / Dichloromethane (1:1, v/v) was added. The mixture was vortexed for 3 minutes. After centrifugation, the upper organic layer was transferred to another 10mL centrifuge tube and evaporated to dryness under Nitrogen gas in a water bath at 37°C. The residues were then re-dissolved in 100μL of Acetonitrile / Dichloromethane (1:1) mixture.
––Figure B: Isotretinoin Reference Standard that used for Method development. Stock Solution of 500μg / mL was added with a diluent of Ethanol / Dichloromethane. The sample for injection was diluted 1:100.
t0: 0.4 minutes

Note: Isotretinoin was originally synthesized with intent as a potential treatment for Skin Cancer. Investigation revealed it was ineffective in that application but also showed notable efficacy for acne treatment.

No 238 Isotretinoin Analyzed in Human Plasma with LCMS pdf 0.2 Mb